Discover E.T.E. in a few numbers

An innovative company in constant development

The MORALES company was formed in 1977, and specialised in traditional boilers and work in the oil&gas industries and wishing to diversify he created European Water Treatment.

In addition to traditional work such as filling stations for tankers or fire systems the company designed and manufactured, for its oil and gas clients, purpose built equipment for the treatment and recycling of industrial waste or run-off water (FINA, British Petroleum, BUTAGAZ…).

For over twenty years the installation of numerous public swimming pools and water parks (hydraulic/water treatment) have allowed E.T.E. to bring together outreach teams that are both mobile and expert; something new which is capable of technological innovation based on information acquired on site.
This led to the creation of a Research and Development Department, bringing together researchers and engineers.

Several patents for processes developed by ETE have been filed

The expertise as well as the ethic of the company has contributed to its forging close links with universities (Perpignan, Montpellier, Toulouse, La Rochelle) and research organisations (CIRAD, CNRS) through the Languedoc-Roussillon regional Transfer centre. These associations have been strengthened on many occasions by the development of innovative processes: treatment of effluent from the wine industry (ETE / USTL), disinfection of sludge from biological treatment plants and septic tanks (ETE / CIRAD), the process for electrochemical disinfection of water.

Several markets have been opened up abroad particularly in the Maghreb in the field of recycling and waste recovery , for example in Egypt (Sanitary Services GOVS-abattoir at El Fayoum / El Azad, Beni Souef Road).
As a result of our many trips abroad we have raised awareness in that society of the gravity of the problems of poor quality of available water resources for some of the population.

The water intended for human consumption , in particular for the most vulnerable sector of society (canteens, hospitals, schools, hotels, …) is often polluted by poor sanitation; a simple microfiltration through strong and durable membranes may be sufficient in the removal of parasites and bacterial strains.

As a result of this realisation, two years of research and development have enabled ETE to bring to the foreign market several ranges of mobile water purification units (clarification / disinfection) for water in several countries in the developing world, mostly in upstream stations packaging drinking water (bottles, containers, …): Senegal, Morocco, Mexico, Columbia, Kazakhstan… 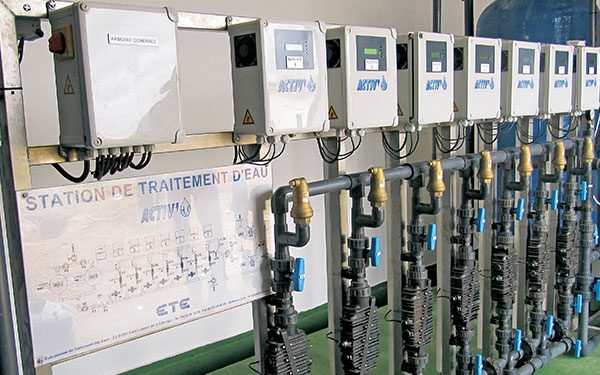 In the interests of reducing the electricity costs of running our mobile units, we have developed and patented a new system of electrolysis of water called ACTIV’H2O.

This system enables the installed power to be cut by half, thereby allowing the supply of electricity from solar panels or windmills.

It also electrochemically generates a residual disinfectant thus protecting the water against microbiological recontamination up to points of use (in pipes and in any storage tanks).

For water not requiring clarification, this system provides a simple and economical solution for making water drinkable by simply connecting a pre-filtration system (sand, cartridge).